BCA 1st Year Output Devices of Computer Notes Study Material: If you choose to do a Bachelor of Computer Applications, it is BCA. BCA is a three-year program in most universities. After getting enrolled for BCA, there are certain things you require the most to get better grades/marks in BCA. Out of those, there are BCA Notes and BCA Semester Wise Notes Study Material, BCA Question Answers along with BCA Previous Year Papers. At gurujistudy.com you can easily get all these study materials and notes for free.

If you are a BCA Student there is a single-stop destination as far as preparation for BCA Examination is concerned. Here in this post, we are happy to provide you with the Topic Wise & Chapter Wise BCA 1st Year Output Devices of Computer Notes Study Material.

An output device is an electromechanical device, which accepts data from a computer and translates them into a form, which is suitable for use by the outside world (the users). The following functions are performed by the output devices:

1. The output device accepts the result produced by the computer in binary form.

2. Then, the output device converts these coded results to a human-acceptable (readable) form (such as, in English, Hindi or other similar languages).

3. Finally, the output device supplies the converted results to the outside world (i.e., the user).

There are two broad categories of computer-produced output:

1. Softcopy Output: It is usually a screen-displayed output. It is a transient form of output and is lost when the computer is turned off. The Softcopy output device is a monitor. (BCA 1st Year Output Devices of Computer Notes Study Material)

2. Hardcopy Output: It refers to information that is produced on paper and can be read immediately or stored and read later. This is a relatively stable and permanent form of output. Hardcopy output devices are printers and plotters.

Monitors are the most popular output devices used today for producing soft-copy output. A monitor displays information in visual form, using text and graphics. The portion of the monitor that displays the information is called the screen. Like a television screen, a computer screen can show still or moving pictures.

There are two basic types of monitors:

Both types produce sharp images but LCD monitors have the advantage of being much thinner and lighter. CRT monitors however are generally more affordable. They are shown in Fig. (a) and (b). 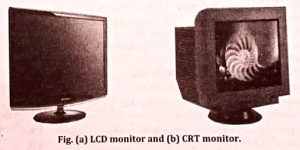 Speakers are used to playing sound. They may be built into the system unit or connected with cables. Speakers allow you to listen to music and hear sound effects from your computer.