The life-cycle of Obelia: Page 2

The life-history of Fasciola hepatica: Page 3

Where is Fasciola found? Give an account of its structure.

Fasciola hepatica is a digenetic trematode. It is an endoparasite in the bile passages and liver of sheep and cattle and completes part of its life cycle in snail. It enjoys world-wide distribution. Thus, its primary host is sheep and secondary host is a freshwater snail, Limnaea, Planorbis or Bulinus.

Body is soft and fleshy. It is dorsoventrally flattened and leaf-like, somewhat oval in appearance. Its anterior end is broad and rounded while posterior end is narrower and bluntly rounded. It is about 18-30 mm long and 4-15 mm broad.

The colour is slightly pinkish and the margins appear to be brownish or blackish. Internal organs are roughly visible because of transparent bodywall.

2. Suckers: There are two suckers : (i) Anterior or oral sucker cup-shaped and muscular. It surrounds mouth. Its muscles radiate from margin of mouth to the periphery. Oral sucker is a suctorial organ. It helps in ingestion as well as in adhesion. (ii) Posterior or ventral sucker is saucer-shaped. It lies about 3-4 mm from oral sucker midventrally. It is without an aperture and is also known as acetabulum. It is meant for attachment only.

3. Apertures : (i) Mouth is terminal, situated on the tip of oral cone is surrounded by oral sucker.

(iii) A single excretory pore is situated midventrally at the posterior end.

(iv) Opening of Laurer’s canal appears temporarily during breeding season, a little anterior to the middle of body on the dorsal side.

Body wall in Fasciola is characteristic and adapted to parasitic mode of life. It is non-ciliated, lacks a cellular epidermis and consists of the following layers : tegument, basement membrane, musculature and mesenchyme.

1. Tegument: It is the outer-most covering of bodywall. It is thick, non-ciliated, cytoplasmic syncytium. It contains mitochondria, endoplasmic reticulum, vacuoles, pinocytic vesicles and pore canals. It is secreted by the secretion of tegument secreting cells lying in the mesenchyme and is continous with their cytoplasmic processes.

Functions: Tegument is thick, tough and is not affected by the action of host’s digestive juices. A number of backwardly directed spines anchor the fluke to the wall of bile passages these render protection and help in locomotion. The numerous microvilli present on the outer surface of tegument help in the absorption of some amino acids from host’s tissues and fluids.

2. Basement membrane: Under light microscope, this appears as a thin non-cellular layer. Under electron microscope, only its outer margin is distinct.

3. Musculature : In Fasciola, the muscles of bodywall are arranged in following three layers :

(i) outer layer of circular muscles,

4. Mesenchyme or parenchyma : The space between the muscle layer and body organs is filled with large, irregular branching and fluid-filled uni-or binucleate parenchyma cells. The mesenchyme tissue is derived from mesoderm and serves as packing material. Some mesenchyme cells are large and their processes extend to the base of tegument.

The digestive system is complex and highly branched and without anus. It consists of following parts:

1. Mouth: It is situated ventrally at the apex of head lobe and is surrounded by oral sucker. It opens into an ovoid pharynx.

3. Oesophagus : The pharynx opens into a short narrow oesophagus that joins intestine.

4. Intestine: The intestine immediately bifurcates into two lateral branches. These run one on either lateral side of the body upto the posterior end where these end blindly. A large number of caeca or diverticula are given out along either side of its whole length. The diverticula of the outer side are large and highly branched, while those of the inner side are short and unbranched.

Pharynx and oesophagus are lined by tegument, while intestine is lined with endodermal columnar epithelial cells and is followed by a thin layer of circular and longitudinal muscles. Caecal epithelium has secretory gland cells.

Food, its Ingestion and Digestion

Flukes suck up blood, lymph, bile and tissue pieces, raped off by oral sucker from the wall of bile passages. Oral sucker and pharynx help in sucking.

Digestion of food is extracellular and takes place in the intestine. The inter-radial. intestinal wall contains secretory and absorptive cells. The digestive enzymes are secreted by the secretory cells and the digested food is absorbed by the absorptive cells.

The absorbed food is distributed to various parts of body by intestinal diverticula and mesenchyme. There is no circulatory system. Undigested food diffuses into the surrounding mesenchyme or is egested through mouth.

From blood and lymph monosaccharides (glucose, fructose) are absorbed through general body surface. Some amino acids are absorbed by tegument through its pinocytic channels. Food is stored in the form of glycogen and fats in mesenchyme and muscles.

Oxygen content in bile is very low. Therefore, respiration in flukes is anaerobic or anoxybiotic. The respiratory organs for exchange of gases are absent. Glycogen inside the cells breaks up by anaerobic glycolysis into lactic acid and CO2. The lactic acid is eliminated through excretory system, while CO2 diffuses out through general body surface.

2. Excretory ducts : The lumen of flame cell is continuous with a capillary duct. The minute capillary ducts from a few protonephridia join to form a narrow collecting tubule. Several such tubules open into larger twigs, which in turn open into vessels. Excretory vessels of anterior part open into two dorsal and two ventral trunks. All of them open into a single median longitudinal excretory canal. 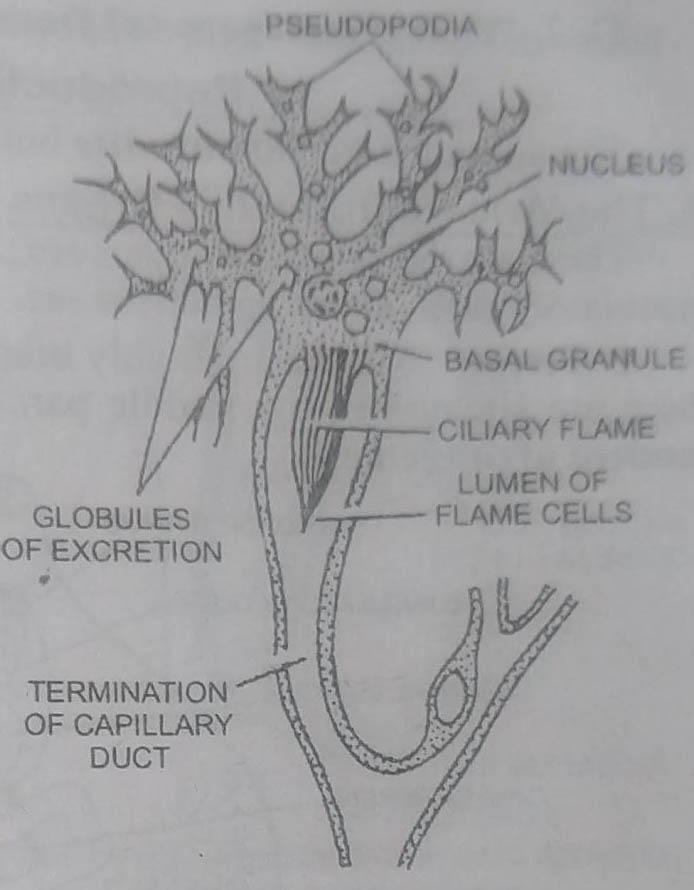 Excretory products of metabolism in fluke are fatty acids, carbon dioxide, and ammonia. CO2 diffuses out through tegument while the soluble excretory products diffuse into flame cells from the surrounding mesenchyme. The vibrating cilia or flagella keep the excretory fluid moving into the tubules and are finally excreted out through excretory pore by the contraction of body.

The enzyme alkaline phosphatase, found in flame cells and collecting tubules help in selective excretion. The excretory system is osmoregulatory also, since it controls the amount of body fluid. 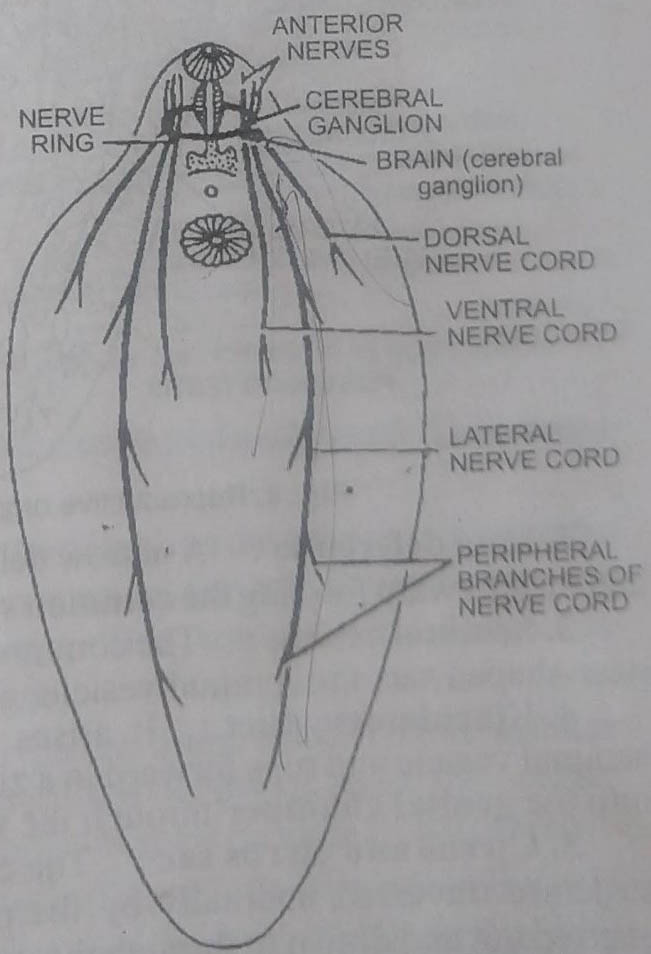 Flukes, being endoparasite, lack sense organs but nervous system is considerably developed. It consists of:

1. Brain consisting of a pair of cerebral ganglia and a ventral ganglion.

2. A nerve collar around the pharynx and connecting the cerebral ganglia and the ventral ganglion.

3. Nerves from the cerebral ganglia to the head lobe and to the hinder part of the body.

4. Three pairs of longitudinal nerve cords. A pair of thick lateral nerves extending to the posterior end of the body and a pair of thin dorsal and ventral nerves to the various organs of the viscera.