Asexual reproduction is rare phenomenon in hemichordates but Gilchrist (1923) reported asexual reproduction in Balanoglossus capensis. In summer months isolated parts of tail of juvenile phase develop completely into adult in subsequent winters. During sexual reproduction zygote of Balanoglossus develops either directly or indirectly depending on its size. The small fertilized eggs develop indirectly but large fertilized eggs develop directly. The indirect development is through a larval form called tornaria larva. In both the cases early phases of the development are same.(Zoology Development of Tongue worm Study Material)

Indirect type of development is studied in Balanoglossus clavigerus by workers like Heider (1909), Stiansy (1914) and Payne (1937).

The prelarval development is similar to that of Branchiostoma. The zygote, produced as a result of fertilization, undergoes cleavage which is holoblastic, almost equal and of radial type. It results into a sphere of blastomeres, the morula. First cleavage is vertical. The second is also vertical but at right angle to the former. Third cleavage is horizontal and results into 8 blastomeres of unequal sizes, upper ones are smaller micromeres and lower ones are larger the macromeres. The morula undergoes reorganization of its blastomers and takes the form of a single-layered, hollow and spherical embryo, the blastula or coeloblastula. Its central fluid-filled cavity is called the blastocoel. Blastula results in about 6-15 hours after fertilization. Within 12 to 24 hours, an invagination starts in the blastula which deepens to form the archenteron that opens to outside through a blastopore. Soon the blastopore closes and the embryo, now called gastrula, lengthens along the anteroposterior axis. Now the tip of the archenteron is pinched off as a coelomic vesicle called the protocoel. Thus origin of coelom is enterocoelic.(Zoology Development of Tongue worm Notes Study Material) 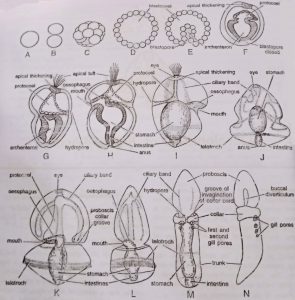 Balanoglossus Stages of DevelopmentThe remaining portion marks the future gut. The protocoel becomes triangular in shape. Its one end gets attached to the underside of the apical thickening and another end opens to outside through an aperture, the hydropore, towards the dorsal side of the embryo. The protocoel and hydropore are the future proboscis coelom and proboscis pore, respectively. The collar and trunk coelom arise as solid invaginations of the hindgut, independent of the formation of protocoel.

With the formation of the protocoel, the inner ends of the early gut moves towards the ventral surface and opens to outside through a mouth. The gut is now regionated into the oesophagus, stomach and intestine. The intestine opens to outside through an anus, formed at the side of the closed blastopore. By this time the embryo becomes uniformly ciliated and escapes from the egg membrane on 7th day to lead a free swimming larval life. It is called tornaria.

Tornaria larva was first described by J. Muller in 1850 who suspected it to be the larva of some starfish. Later on it was known to belong to Balanoglossus clavigerus. It is so called because of its habit of rotating in circles. It is clear, glossy in appearance with an oval body ranging upto 3 mm in size. It has a ventral mouth near the equatorial plane of the body, a posterior terminal anus and gut differentiated into an oesophagus, stomach and intestine. The cilia form two bands on the body surface. The anterior ciliary band or circumoral band takes up a winding course over the preoral surface and forms a postoral loop, its cilia are short and serve to collect food. The posterior ciliated band or telotroch, occurs as a ring in front of the anus, its cilia are long and serve as locomotor organs. At the anterior end is an apical plate of thickened epidermal cells, which bears a pair of eye spots or ocelli and a tuft of sensory cilia called apical tuft or ciliary organ eyes are cup shaped, cavity of the cup is filled with clear material constituting the lens. Cells of the cup are provided with pigment granules. The protocoel (proboscis coelom) in the form of a thin-walled sac, is present and opens to the exterior through a hydropore (proboscis pore). To the right of the hydropore lies a pulsating heart vesicle. The collar and trunk coeloms appear in the older larva.

The larva swims freely, leads a planktonic life, feeding on minute organisms, and metamorphoses into an adult worm. During metamorphosis, the size is reduced probably due to loss of water. Transparency, ciliary bands, sensory cilia and eye spots are lost. Body becomes differentiated into proboscis, collar and trunk by the appearance of two constrictions, and the trunk region is elongated. The hydropore persists as proboscis pore, and the buccal diverticulum and gill-slits appear as outgrowths of the alimentary canal. Reproductive organs mark their presence, probably they develop from mesoderm. Tongue bar grows. An adhesive post anal tail is formed which helps in anchoring the young worms and later resorbed. The animal now sinks to the bottom to lead a benthonic life as an adult.

Direct development is found mostly in the genus Saccoglossus. It is found in the large eggs provided with good amount of yolk. In this case tornaria larva is not formed. Blastopore of the gastrula narrows down and finally closes. Cilia develop on the general surface of the gastrula stage of the embryo. Later embryo becomes free and swims in water for about 24-26 hrs. The embryo elongates and becomes more worm like. A transverse groove appears and mouth develops by invagination on the position of groove. The anus develops at the position earlier occupied by blastopore. Before formation of mouth, a diverticulum is separated off in the anterior region from the archenteron. The cavity of this forms the proboscis coelom. Paired collar trunk coelom is formed as outgrowth from the posterior wall of the proboscis cavity directly from the walls of archenteron. At this stage structures elongate and get differentiated into proboscis, collar, trunk etc.