The sexual reproduction in Marchantia: Page 2

Q. 1. Give a brief account of the structure of thallus of Marchantia and modes of vegetative reproduction in this genus.

Ans.1. The genus Marchantia includes nearly 75 species and is worldwide in its distribution. It grows well on most rocks and soils in shady places. It is widely distributed on banks of cool streams, in damp burnt soil and shady cliffs. Kashyap has reported four species from India which are : 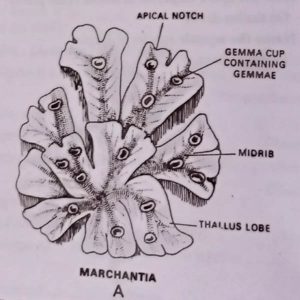 The species of Marchantia are distributed all over the world. M. polymorpha is the most common and most widely distributed species.

About 11 species have been reported to occur in India by Chopra (1943). Ram Udar (1970), however, accepts only six species to be present in India. The Indian species are confined mostly to the Himalayas, but are present in the South Indian hills as well as in the plains of Punjab, Haryana and Uttar Pradesh. Kachroo et al. (1977) have listed about 12 species of Marchantia from India.

These are M. polymorpha, M. palmata, M. palaeacea, M. assamica M. subintegra. M. geminata, M. linearis, is the best known species of the Himalayan ranges, and M. palmata of the plains of Indian subcontinent. M. palmata has been reported from South India by Iyengar. 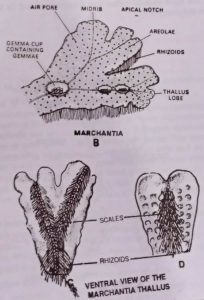 Most of the species of Marchantia are terrestrial. The only exception is M. polymorpha var. aquatica which is found submerged meadows. M. palaeacea and M. domingensis occur frequently on lime stones and calcareous shells respectively.

Morphology- The plant body Marchantia is gametophytic or haploid (X) in nature. The plant body is thallus like, prostrate, dorsoventrally differentiated, dichotomously branched, they possess a prominent midrib thallus is dark green in colour. The thallus may attain a length of 5 cm. to 10cm. Each lobe of thallus possess a distinct midrib and an apical notch, its margin is weavy. 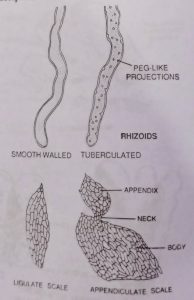 On the dorsal surface certain cup like structures, the gemma cup are present. These are special vegetative reproductive bodies.

In some cases certain special upright branches are developed at the growing apex. These branches bear the sex organs and are of two kinds, antheridiophores and archegoniophores. 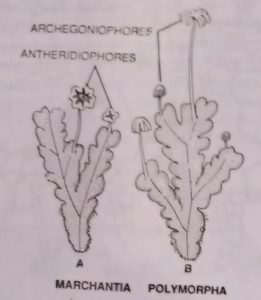 A vertical cross section of the Marchantia thallus (gametophyte) shows a high degree of internal differentiation. It is clearly differentiated into upper photosynthetic and lower storage regions. The upper epidermis is usually colourless or pale green. The epidermis has pores.

The pores are barrel shaped, consisting of four or five superimposed cells and having both an upper and lower opening. These pores thus communicate with air chamber below. Below upper epidermis is a loose green dorsal region with a single horizontal layer or air chamber. Each chamber opens outside by means of a pore. From the floor of chambers simple or branched photosynthetic filament arise. (BSc Botany Marchantia Sample Model Practice Question Answer Papers)

Just below the air chambers (photosynthetic region) there is a compact, colourless ventral region known as storage region and its cells consists of starch grains. Some cell may have a single oil body or filled with mucilage. From the lower epidermis arises two types of smooth and tuberculated rhizoids and four or more rows of scales.

The vegetative reproduction mostly takes when the conditions are favourable, by the following methods: 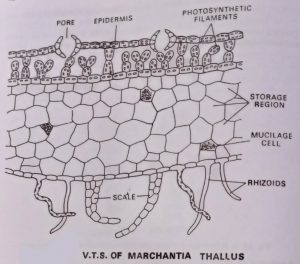 (i) By death and decay method: By the progressive death and decay of older parts reaching dichotomy. At the place the individual branches becomes separate and each branch gives to a new plant.

(iii) By Gemmae formation: This is a profilic and specialized method of vegetative reproduction. The gemmae which are special reproductive bodies, produced in large numbers in small gemmae cups. Each gemmae has a small stalk and a middle and thin at margins. There are two notches on the lateral sides which are diagonally opposite. Most of the cells of a gemmae some contain chloroplast, while few possess oil. There are rhizoidal cells also. 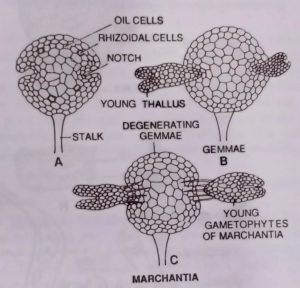 Each gemmae after falling on the soil and on the approach of favourable condition develop into two thallus of Marchantia gametophyte. First of all two special cells in the two notches become active and begin to grow and develop in the same manner at those at the growing tip of a branch.

Due to the activities of these two cells in opposite directions, two young thalli are formed simultaneously. The rhizoids are formed from the rhizoidal cells.

Ultimately the gemmae exhausted and die and the two young thalli get separated. These thalli developed into two gametophytes of Marchantia. 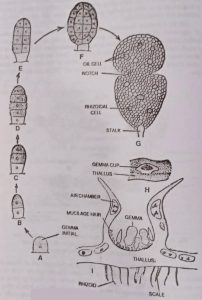 Development of gemmae takes place in the gemma cups on the dorsal surface of thallus. Gemma cups are formed by rapid growth of neighboring cells thus assuming cup like structure. Any cell of floor of gemma cup functions as gemma initial which divides by a transverse division into stalk cell gemma proper cell.

The stalk cell directly forms one called stalk which the gemme cell by repeated transverse and vertical divisions forms a gemma. Afterwards by periclinal division in the central cells it becomes several cell in thickness and thus a oval disc like gemma is formed.

Gemmae: Gemmae are the special asexual bodies met within Marchantia. They are produced in cup like structures, the cupules or gemmae cups developing on the dorsal side of the thallus. The epidermal cells of cupule act as initials of gemmae. Each gemmae is a stalked bilobed structure.

A shallow depression (notch) is present on each of the two lateral sides. Growing point remains present within this notch. Most of the gemmae cells are chlorophyllous but same may be colourless (the rhizoidal cells). Intermingled with the gemmae are present various club shaped mecilage cells.