BCA 1st Year Flowcharts Notes Study Material: If you choose to do a Bachelor of Computer Applications, it is BCA. BCA is a three-year program in most universities. After getting enrolled for BCA, there are certain things you require the most to get better grades/marks in BCA. Out of those, there are BCA Notes and BCA Semester Wise Notes Study Material, Chapter Wise/ Topic Wise BCA Semester Wise Notes, BCA Notes Pdf Download, BCA Sample Model Practice Question Answers along with Previous Year Question Papers.

At gurujistudy.com you can easily get all these study materials and notes for free. If you are a BCA Student there is a single-stop destination as far as preparation for BCA Examination is concerned. Here in this post, we are happy to provide you with the Semester Wise, Topic Wise & Chapter Wise BCA 1st Year Flowcharts Notes Study Material.

“A flowchart is a step-by-step diagrammatic or pictorial representation of the algorithm for the solution of a problem” and flowcharting is the technique of drawing a flowchart.

Flowchart Helps in Program Development: It helps a person to understand the sequence of steps necessary to solve a given problem at a glance. Once developed and properly checked, the flowchart may be an excellent guide for writing the program.

Flowchart Symbols: Flowcharts are constructed by using special geometrical symbols. Each symbol represents an activity. The activity could be input/output of data, processing of data, taking a decision, terminating the solution, etc. The arrow joins the symbols to obtain a complete flowchart. Designs of flowcharts are very much flexible, so no two people can draw the exactly similar flowchart of a single problem.

The symbols described below are as per conventions followed by ISO (International Standards Organization).

1. Terminal Symbol: Rectangle with rounded sides (oval) is used to indicate BEGIN (or START) and END (or STOP) of a program.

2. Processing Symbol: Rectangle is used to indicate a set of processing operations such as for storage and arithmetic operations. Normally, the LET statement is used for such operations.

3. Input/Output Symbol: Parallelograms are used to represent input and output operations. Statements like INPUT, READ, and PRINT is used for these operations.

4. Decision Symbol: The diamond is used for indicating the step of the decision-making and therefore, known as the decision box. It is used to indicate the process of logic in a program, which may be used for getting an answer to a question or maybe for testing any condition. Computer-based on the answer selects the further flow path. The decision box must have at least two exits, although a third may be added sometimes if required.

5. Flow Lines: An arrow indicates the flow of operation. Every line in a flowchart must have an arrow on it.

6. Connector: If the flowchart extends over more than one page, the different parts can be joined with a connector. A circle is used for this purpose. A letter or digit is placed within the circle to indicate the link.

7. Predefined Process: A group of operations not detailed in the particular set of flowcharts.

8. Annotation or Comment Symbol: A broken line and bracket represent the annotation function – the addition of descriptive comments or notes for clarification of some statements. 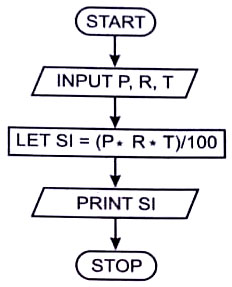 General guidelines for flowcharting are given below: